Welcome to The Sky

A Message from Robert

There will be no SKY music this year maybe around this time next year..☆ Instead I will be doing a solo album with many different musician friends that I have known through the years.. Plans for recording will be sometime this year in Los Angeles that is the plan and will be filming also.. Friends who have confirm for the project...Frankie Banali Drums from Quiet Riot. . Bobby Rock Drums from the Vinnie Vincent and the Lita Ford band..Gregg Potter Drums extraordinaire from the Buddy Rich band ..and someone from Journey on drums..? To be announced ...George Lynch guitar from Lynch Mob, Dokken.. Monte Pittman guitar from Madonna ,Prong.. Rusty Anderson from Paul McCartney band on guitar..Chip Znuff Bass. from...Enuff Z Nuff .. Tony Franklin Bass . from the Firm. And more great players to be announced as they confirm...I'm very excited about the project.. & I think you're going to like it ...☆☆♡☆☆ ......Robert

May 30, 2014 - No matter how much you prepare yourself, if I told you the former Journey singer Robert Fleischman and the guitarist of Alabama Thunderpussy had a band together, you couldn't "imagine" what the music would sound like... MORE

May 24, 2014 - Before the band Journey was introduced to Steve Perry, frontman, Robert Fleischman was hired on to take the original lead vocalist role. . Going on tour with the band and writing hits like, “Wheel In The Sky,” "Winds Of March," and "Anytime," .. MORE

May 5, 2014 - In Decibel Geek's Part 5 of their Vinnie Vincent Special, they interview THE SKY's Drummer, Andre LaBelle who was chosen by Vinnie Vincent to drum on the Guitars From Hell album.
Read and listen to part 5 here

April 8, 2014 - Robert Fleischman talks to Studio B about the new Majestic CD
Click below to listen to the available podcast.. Listen 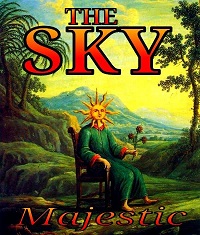 The new 2014 Majestic Tour is scheduled to kick off in Florida sometime in early June. Look for the newest information here and on facebook.